The appliance was delivered new to Scottish Oils Ltd and was used as a factory fire engine until 1968.

1968 to 1980, the appliance was displayed in the Edinburgh Fire Museum, but sadly had to be disposed of as there was no room for it following the museum relocation to Lauriston. 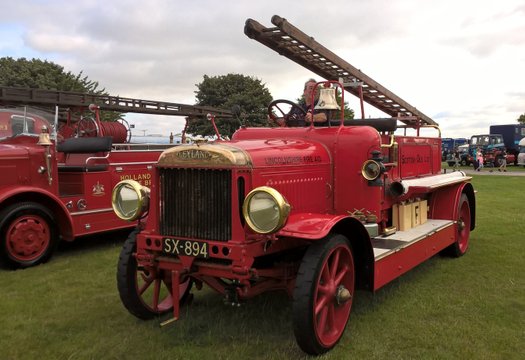 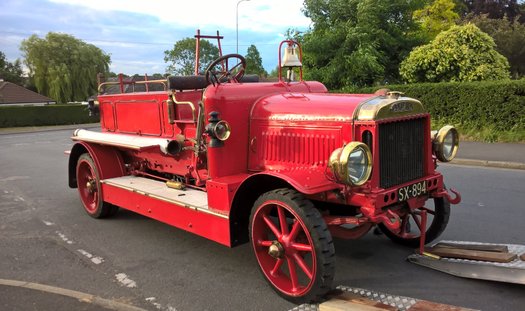 In late 2017 the North Western Transport Museum Society committee decided that it was time to find a permanent home for the appliance. It was offered to the Scottish Fire and Rescue Service Museum, this was declined and an agreement was made with Lincolnshire Fire Aid who collected the appliance on 18th June 2018.

After some work on the engine it was started for the first time in 40 years on the 8th July 2018.

The appliance carries a Rees centrifugal pump with a delivery of 375 gallons per minute at 100Ibs/sq in, Leyland 4 cylinder 10 litre petrol engine delivering 55 bhp, drives through a cone clutch and 4 speed

gearbox to a worm drive back axle. The footbrake operates a transmission brake and the handbrake operates drum brakes on the rear axle. Everything on this appliance is original equipment, the vehicle will travel at 25 to 30 miles per hour which in 1921 was a reasonable speed.

During January and February 2019 work was carried out to cure all water leaks around the engine, the block inspection plates were removed and the build-up of sludge was flushed out. All gaskets around the engine were renewed, the radiator was dismantled and cleaned out and new gaskets fitted during its rebuild, as a precaution a temperature gauge was fitted.

During January and February 2020 more maintenance is being carried out which will include removing all the hubs and lubricating the bushes, checking and freeing off the brakes, freeing off various pins, shafts and bushes, removing the clutch and renewing the drive plate friction material, and fitting a ring gear and electric start.

The appliance is frequently taken to shows and events and always gets people asking questions about its history.